Here is the newest label by NGC:

LCR Coin is offering this very special 2021-W Type 1 Silver Eagle First Day of Issue NGC PF70UCAM signed by David Motl. NGC encapsulation guarantees the coins PF70 Condition as a flawless example of this Type 1 Silver Eagle. The US Mint capped the mintage of 2021 Type I ​​​​​​​Proof Silver Eagles at 327,440 and on February 11th the coin SOLD OUT IN MINUTES.

David Motl, who formerly served as the Acting Principal Deputy Director of the US Mint during a particularly innovative time in its history. Motl became Acting Principal Deputy Director of the United States Mint and its senior career official in January 2017, placing him in charge of the Mint until he retired in January 2018. During Motl’s tenure, the Mint celebrated its 225th anniversary, which it commemorated with the American Liberty 225th Anniversary Gold Coin and Silver Medal. Motl also supervised the release of the 2017 American Palladium Eagle, the first palladium coin issued by the United States, as well as the 2017-P Lincoln cents, the first cents to feature the “P” mintmark. Notably, under his watch the United States Bullion Depository at Fort Knox opened its vault for a rare visit by the Secretary of the Treasury and a congressional delegation.

While at the Mint, Motl received several major distinctions and awards, including the Mint’s Rittenhouse Medal for Excellence in Leadership. The Rittenhouse Medal is the Mint’s highest honor, awarded for sustaining a superior record of performance that significantly furthered and ultimately improved the bureau’s programs, operations and services. Prior to becoming Chief Administrative Officer / Acting Principal Deputy Director, Motl served as the Mint’s Chief Financial Officer from May 2012 through January 2017 and Acting Deputy Director for Management from January 2016 through January 2017. He started his career at the US Mint in June 2006, when he was selected as the Deputy Chief Financial Officer. 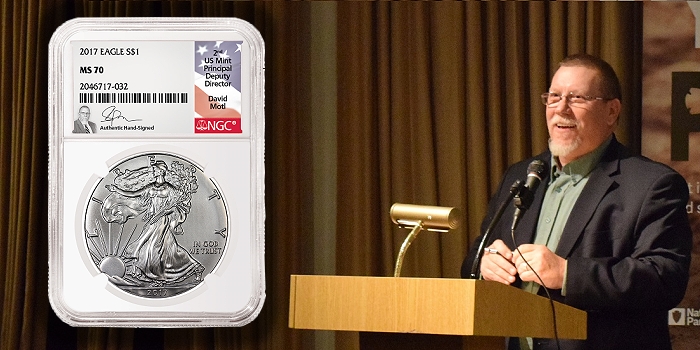 If you are a collector of modern graded U.S. Mint coins, you owe it to yourself to add this premium NGC graded Silver Eagle coin to your collection today!

Since 1986 (for 36 years) the U.S. Mint has struck the same design for the beloved American Silver Eagle. 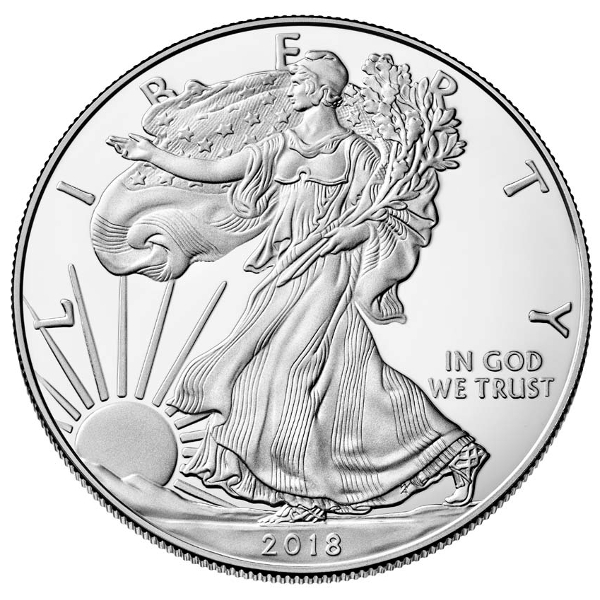 The American Silver Eagle is the official silver bullion coin of the United States first released November 24, 1986. American Silver eagles are only struck in the one-troy ounce size, which has a face value of one dollar and is guaranteed to contain one troy ounce of 99.9% pure silver. The Silver American Eagle coins were minted at the San Francisco Mint from 1986 – 1992. From 1993 – 2000 the coins were minted in the Philadelphia Mint. In 2001 the Silver Eagle production moved to West Point where the minting is still done today. Adolph A. Weinman designed the obverse known as The Walking Liberty and John Mercanti designed the reverse.

This beautiful American Silver Eagle was certified and graded by NGC (Numismatic Guaranty Corporation). NGC is a highly respected grading company and one of the largest in the United States.

*The coin pictured is only a representation of the coin you will receive, not the exact coin (serial numbers will vary).