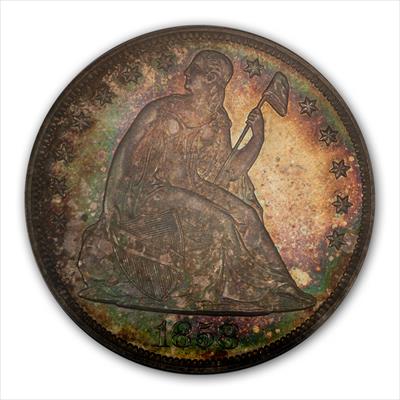 The 1858 Seated silver dollar is both famous and infamous for its status as the sole proof-only issue in this series. The 1858 Seated dollar is; along with the 1851 and 1852 issues; among the top three Keys to the series. Though the 1858 Seated dollar is two or three times rarer than the proof-only 1895; it's more affordable due to the smaller collector base. The present Gem example displays sapphire and emerald toning with vivid pink highlights on the obverse with a vibrant gold in the center; while the reverse has sapphire centers and gold along the rim. The strike is bold; showing weakness only at the top of the eagle's left wing. It is unfinished beneath Liberty's chin; suggesting that it is an original 1858 proof; rather than a restrike. PCGS has graded only 6 with a mere 2 finer. In Cameo; PCGS has only graded 3 coins in all grades combined; the highest being a single PR64+. If you are pursuing a set of these beautiful coins; this is a wonderful opportunity to own one of the finest examples.